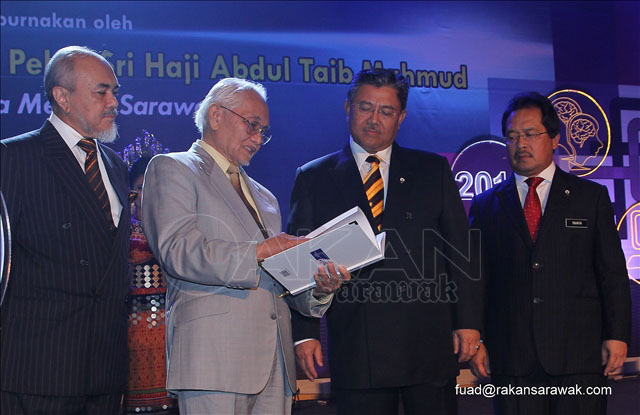 As Sarawak embarks on its Second Wave of Development through the Sarawak Corridor of Renewable Energy (SCORE) initiative, it is vital for the State Civil Service to prepare for the challenges that can be anticipated, as the State plays a more important role in the globalised economy.

However, in a global playing field, the standards set by the more developed nations may not be practicable or even relevant to countries that are still developing.

As such, Sarawak will have to find the best way to overcome the challenges in the future and to cope with the practices that keep moving with the requirements of the State’s development.

According to the Chief Minister, YAB Pehin Sri Haji Abdul Taib Mahmud, the key to overcoming some of the challenges Sarawak is set to face is to truly understand what the world expects from the State and working on finding the right balance to fit the State’s development needs.

He explained that as part of the global marketplace, the world now expects certain high requirements from Sarawak and for the State to comply with the standards that have been set by the developed nations.

Citing the example of environmental conservation, the Chief Minister pointed out that with many of the developed nations, the very high standards they set would be considered “irrelevant” to the aspirations of Sarawak to become a developed state by the year 2020.

“We cannot spend the same amount of money like they do in Germany, or in America, or in Canada; development is impossible to perform at that price or at that cost,” he said, in his special address during the 2012 High-Performance Team Retreat organised by the Chief Minister’s Department, in February.

The Chief Minister added that it was important to balance development and conservation because just like other nations, Sarawak needed to preserve its environment for future generations.

“For me, we need to take steps in the context of the wellness of Sarawak; we need to study many things that used to be irrelevant.”

As such, civil servants, who are placed in charge of matters related to the environment, must be able to recognise both the expectations set by the world and the aspirations of the people for development and progress.

“Civil servants have to understand many things; to look at NGOs (non-governmental organisations) with different eyes… choose NGOs who are relevant, who can be understanding, and who can use scientific approaches.

“Of course you cannot satisfy everybody, but choose those with relevance to your environmental policy and consistent with what the world wants.”

“These are the kind of things that we need to be aware of; (we need) to fight with integrity, with dedication, and we have to be patient; otherwise you will be harassed by unnecessary nuisance.”

Thus, for civil servants, there is no substitute for acquiring and mastering knowledge, especially on topics and issues related to the government’s development initiatives.

The Chief Minister also stressed that apart from having superior knowledge members of the State civil service should also address criticism and accusations with facts, without descending into arguments; rather to communicate in ways that are appealing to youths and the community at large, and also to persevere in this undertaking.

Apart from that, the civil service will have to arm itself with the capability and capacity to work more effectively and efficiently with the private sector, which will be the main engine of growth for the State economy through SCORE.

The Chief Minister pointed out that the civil service was actually the only organisation that could work within a system, which shared information to produce practical policies that the private sector can benefit from.

“You cannot develop private sector as separate mechanisms of development to share our vision,” he said, while adding that rather than simply focusing on profits, the civil service has a responsibility to draw them into the bigger picture of development.

“The private sector has got to learn there are many things that we need to tackle together, regardless of whether they’re your partners or competitors.”

He, therefore, described the cooperation between the public sector and the private sector as “indispensable” in achieving progress and development for the State.

At the local government level, the challenge will be on increasing the role and importance of the civil service within the local authorities, while reducing the political elements.

The Chief Minister believed that there was too much politics at the local government level today and thus felt that it was timely to bring in people who have demonstrated their dedication in areas such as charitable works, commercial ventures, health advocacy, education and agriculture.

He also believed that many of these talented people would emerge from society, and this would be the opportunity to bring them into local government system and setup.

“If we structure it properly, I think that we can bring about further transformation of our society. That final transformation is called ‘empowerment of the ground workers’ and that is coming whether you want it or you don’t want it; either you want it in a healthy manner or in an unhealthy manner,” he said, adding that this process of transforming the local government at the most basic level would probably take five years to complete.

As for the challenges brought about by the Internet and social media sites, it must be acknowledged that these communication channels are very powerful, and that they can be used for good or for bad.

When used for purposes that are bad, the Internet and the media could actually cause Sarawak to lose its momentum in developing the State.

Giving the example of the unrest that happened in several countries in the Middle East that was attributed to social media’s influence and role, the Chief Minister stressed that their development has been obstructed and these countries have lost their peace.

“As strange as it may seem, any society needs consensus; a minimum consensus. It’s one basic thing that society needs (but) if you question it, your progress will be very, very slow.”

For the civil service, it must therefore strive to find out how people develop their views about certain topics and at the same time increase interaction within the society.

As such, members of the civil service must be able to communicate more effectively with the people, to ensure that the people are able to formulate a true picture or understanding of the situation in the State.

Factors to determine the success of digital governance

Factors to determine the success of digital governance