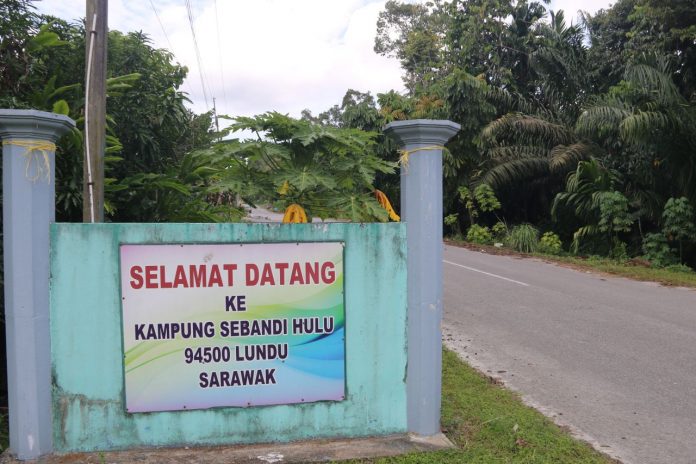 The village currently consists of 275 people living in 53 houses. Majority of whom are Iban, with other ethnicities including Malay and Bidayuh becoming part of the community mainly through intermarriages.

Many of these villagers are farmers planting commodity crops such as oil palm, rubber and pepper. Some are river fishermen catching giant freshwater prawns (udang galah). Meanwhile, most of the village’s youths work and live in the city to earn a living.

Kampung Sebandi Hulu used to be popular among tourists for its traditional longhouses. However, these longhouses were caught in a fire and had been reconstructed into one-family kampung houses.

Nevertheless, the village remains an attraction as a fishing spot, especially on weekends between February and June, where fishing enthusiasts who come mainly from Kuching rent boats from villagers to catch freshwater prawns.

Encouraging the Village to “Stand on Its Own Two Feet”

According to Lundu District Officer Mr Gustian Haji Durani, the village was chosen to be part of the programme due to the area’s rather poor and backwards condition compared with other villages in Lundu District.

“In terms of physical, in terms of infrastructure and also in terms of mentality among villagers of Kampung Sebandi Hulu, we find that they are still at a relatively low level,” he explained in an interview with RAKAN Sarawak.

He added that in the initial stage of the programme, the village’s Village Security and Development Committee (JKKK) and people in general were uncertain about being participative in the programme or the process of transforming their village.

Eventually, through a special development programme, the district office has succeeded in training, guiding and supporting the villagers in planning and managing the village’s socio-economic development.

This helped to gradually change the villagers’ mindset towards becoming more self-reliant when bringing progress to their own home.

“They are now more inclined to refer to other matters that (the district office) can arrange to help them advance the village, (which) can be seen in terms of physical, economic and social development.

“They have come to realise that they need to develop their village and move in tandem for the sake of sustainable progress and management at the village level,” said Mr Gustian.

Since the beginning of its participation in the Rural Transformation Programme in July 2019, over RM500,000 have been spent on projects and programmes at Kampung Sebandi Hulu.

The most apparent are physical and infrastructural changes, such as resurfaced roads, new drainage and overall cleanliness in the area.

The village has also been enjoying clean treated water supply supply since last year, which is part of a water supply upgrade in Lundu District and Sematan Sub-district by Sarawak Rural Water Supply Department (JBALB).