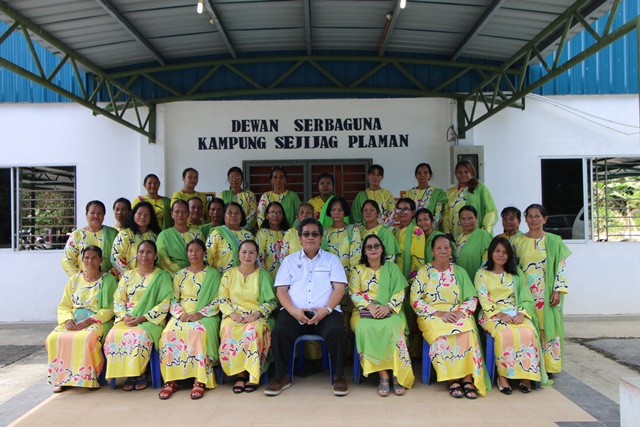 As the Chairman of PPWS for Serian Division, Antonia Anak Tingui, the members are actively involved in co-organising events and activities with the Village Development and Security Committee (JKKK) of Kampung Sejijaq Plaman.

“Our main aim for the women in this village through PPWS is to empower them to become financially independent, to acquire new skills, as well as to widen their social circle,” she said.

Sally Anak Buwang, who is the Chairman of PPWS for Kampung Sejijaq Plaman branch added that among the main activities organised by them includes farming at their PPWS Kampung Sejijaq Plaman vegetable garden, selling kuih (cakes) to the nearest village or down town, organising communal events as well as engaging in community work at their kampung.

“With the money that we get from selling our kuih and harvests from the vegetable garden, we will usually use it to but food ingredients for when we have to cook for any big special communal event at our kampung,” said Sally.

She also added that they also have a shared glutinous rice paddy field, but it is mainly for self-consumption.

“Last year, we even organised a ‘Ladies Night’ event for the women and mothers in our kampung to show our appreciation for their accomplishments and sacrifices for their families,” said Sally.

“We even funded our own trip for PPWS to Sematan last year with hope that we can broaden their mind and to give them exposure,” she said.

Apart from that, PPWS Kampung Sejijaq Plaman is also fostering the spirit of entrepreneurship among the women.

Antonia who is a successful entrepreneur herself said that they encouraged them to sell their handwoven handicraft and kuih for extra income.

Antonia started her business of planting pineapple since 2015 on a five-acre land in Kota Samarahan.

“I married young and being a housewife, I thought of things that I could have done with my free time. I was inspired to start pineapple farming when I first saw a pineapple field in Kota Samarahan years ago,” she said.

She later went to the Malaysian Pineapple Industry Board in Kota Samarahan for help in terms of acquiring fertilizers and the saplings.

Hoping to inspire them with her experience, Antonia encouraged the women to sell their crafts to people from nearby villages or visitors.

Self-taught weavers, Jimoi Anak Rados and Men Anak Mudin said that taught themselves to weave by examining the handicrafts they bought at town and try to replicate it.

Sometimes, they would also get together with women from other villages to learn and improve weaving skills for their handicrafts.

By hoping the women could sell their crafts, both Sally and Antonia are hoping that the PPWS members could be financially independent as most of them are housewives and can help generate extra income for their families.

In the future, Sally and Antonia hopes that they can reach out to more women from the villages in vicinity to join PPWS.

“I hope that in the future, the younger generation in this area will continue with what we have done for our village by empowering each other,” said Sally.